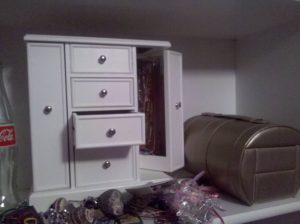 God forbid that your home ever gets burglarized. It’s something that you just don’t think will happen. Last year it happened to me twice. The first time was the quick grab and dash. The second, well they were still quick, but they took what they didn’t the first time because they had already cased out our home. The first they took most of my jewelry with the exception of what I was wearing, the second time they took my daughter’s – jewelry box and all.

I’m not saying all of this to make you scared, but people are trying to make ends met and it’s not always legal. I just want you to be prepared if something to you happens. I was thinking of this yesterday when I met a lady while out shopping. She says that she remembers everything in her jewelry box. Either she doesn’t have much or she’s overrating her memory. I used to think that too until I had to actually sit down and write it all out for the police.

So, pull out that camera and start taking pictures. It can be a still camera or video. If you have your jewelry out on display, just start snapping away. If you keep your jewelry in boxes, open them up. Take pictures of the items in every drawer and under every lid. If you are video taping you can note details of pieces are you are filming. Next, don’t let those photos sit on your camera – guess what, that gets stolen too. And not just on your computer hard drive, it can crash and can also get stolen. Thieves love electronic stuff too. Make copies and put it in a safe deposit box, at a relatives house or a best friend you know you will really have for the rest of your life.

It doesn’t take very long and is well worth it. Fire and floods can happen too. It’s just good to be prepared.

This site uses Akismet to reduce spam. Learn how your comment data is processed.