So, I have decided to start trying out some the cool things I have been seeing on Pinterest. Project #1: DIY Canvas Quote. Looks simple enough. Right there under the picture were the directions, use re-positionable vinyl letters and paint over. Peel off letters. Oh, I can do that I said.

I wanted to do a small one using only materials that I already had – didn’t want to go buy anything. First, I got my canvas and found a picture in a magazine. I cute it out and glued it to the canvas. I squeezed glue out and smeared it flat with my finger. Then put the clipping on top. I smoothed it out with my fingers and then used a brayer to make sure all picture came into contact with the canvas. Right away I noticed ripples in the paper. That made me frown. The Pinterest photo did not have any bumpy areas that I saw. 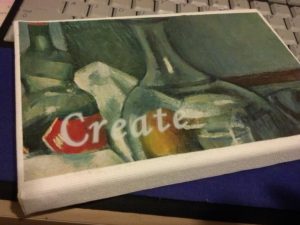 But I kept going, carefully sticking on my letters so they would do they’re job, but I would still be able to peel them off later. Then I squirted paint on to my canvas and painted the surface with different brush strokes. I waited until it was dry (which was not long because I used acrylic paint and a thin layer).

Then I peeled off the letters – very carefully I might add, because the paint was sticking to the letters and peeling off too. So I had to hold he edge of the paint down with my fingernail in places while I took the letters off with my other hand. It was lumpy bumpy and it did not make me happy. I mean, I didn’t even know if you would know that it said create when you looked at it. My husband poked his head in the studio and I showed him. Frowning of course because I was not happy. He said, it says create. Oh, well, okay. Am I being too harsh on myself, again? Hmmmm. 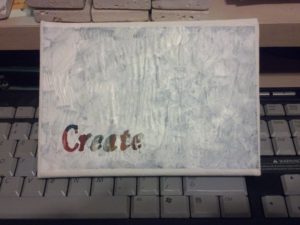 I then decided that I would find that Pinterest Pin and actually follow the link to see how it was done. Lo and behold, those pieces where not flat and pretty. You just couldn’t see it in the small photos. It’s suppose to be messy, textural. Which was good because I like texture. Oh, now that made sense, because I was really trying to figure out how in the world it was suppose to be so perfectly flat. I also decided that a sans serif font (that would be like Arial)  would be best. I used an italic font because that’s what I had on hand. This morning I went in and filled ever so very carefully a few spots to make the letters a little more readable, but still jagged. So, I think I will try again using my new found knowledge and see what transpires. Because that’s what really matters and drives me – I create.

Almost forgot, here’s what I used:

This site uses Akismet to reduce spam. Learn how your comment data is processed.